Robin and I have been friends for well over 20 years and yesterday's celebration wasn't just any baby shower. You see, Robin has been married for 10 years and they hadn't been able to have a baby. After years of challenged fertility issues and a couple of gut wrenching miscarriages, Robin had nearly given up hope of having a family. Chuck, her husband, is an officer with the Oklahoma Army National Guard and late last summer they received word that he would be sent to Iraq for no less than a year. At 40 years old, this crumbled their hopes of having a baby further still. In December, Chuck and the others from the guard, were brought home as a surprise to their families for a week during the holidays. And as you can see from the above slide show, we are now joyously celebrating this very special impending gift that God has bestowed upon these two amazing people.
Chuck is still serving in Iraq, but he will be allowed to fly home for the birth of their son the first week in September. Robin is being induced on the 6th so that daddy can be present for the birth. Congratulations and I love you, dear friend!

And just to keep it raw.....Today's post isn't complete without sharing the new recipe that was birthed yesterday. You must try this....it is really rich & delicious and you'll swear it's not raw! 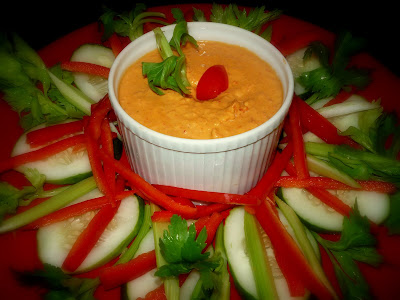 For the “roasted peppers & garlic:”
4 red bell peppers
4 – 6 cloves garlic
2 tsp. olive oil
¼ tsp. sea salt
For the hummus:
2 zucchini or yellow crook neck squash, peeled & chopped
¾ cup raw sesame tahini
½ cup feresh squeeszed lemon juice
¼ cup olive oil
2 ½ tsp. sea salt
1 tsp ground cumin
First – cut, de-vein & de-seed the peppers. Smash & peel the garlic cloves. Toss both in olive oil and salt to thoroughly coat. Lay pieces on a Teflex sheet and tray, dehydrating at 115 F for 12- 24 hours. The longer you leave in the stronger and richer the flavors become. Set aside.
In a high speed blender or food processor, combine all of the ingredients for the hummus and blend until thick and still slightly chunky. Add in the roasted mixture and blend again until well combined & smooth.
This savory dip is best served with slices of cucumber, zucchini, celery stalks, carrot sticks or sliced bell peppers. It is also delicious with raw onion bread or flax crackers of your choice.
Posted by Penni at Sunday, July 27, 2008

Praise God for finally answering their prayers for a baby. I will be praying for a safe and marvelous delivery of that sweet little baby! What an amazing story.

wow, I´m so happpy for them, she looks so beautiful!
God Blesses them!

Oh wow, how exciting! Many congrats to your dear friends, how wonderful that their dream is coming true!

It may have taken longer than they planned and been harder than expected but that's because this baby was meant to be theirs at this moment in time.

Thanks for sharing Penni...that is so awesome! I wish the very best to all three of them. Keep us posted and maybe some pictures:)

Congratulations to your friends on the baby.

I'm a hummus F.R.E.A.K. I will have to try your version. Sounds great.

yay!!! what a happy story! And what a tasty looking recipe!

I have a few people close to me who at one point were beginning to wonder if they'd ever have a baby! When they were finally holding their baby in their arms I was so totally overwhelmed with emotion, getting teary eyed and choked up...
This must be a most exciting time for them. Bittersweet with Dad being away for much of the time, but wonderful that he can be there for the birth!

What a blessing, a true miracle! Thanks for sharing such great news and photos of such beautiful friends here on your blog!

I am salivating for your yummy hummus! I am "stuck" here with packers packing the house and all my fresh food has already been removed and I am left here alone with nothing but water, peanut butter and some canned goods....not even a Lara bar to be found. I am starving! I wish you were my next door neighbor, I'd be ringing your doorbell right about now!

That is such a wonderful story!!! Thank you for sharing :)

What a great story! :) That is so wonderful, they are really blessed.

That hummus looks amazing. I am going to copy this recipe down asap! I love hummus!

that's interesting, i was at a baby shower sunday too. they are fun, huh?

i wonder if the hummus could be made without the garlic, hubby is allergic. :-(

A miraculous story! How wonderful - congrats to the happy couple! 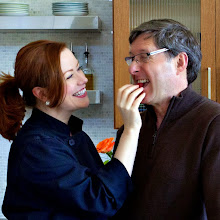 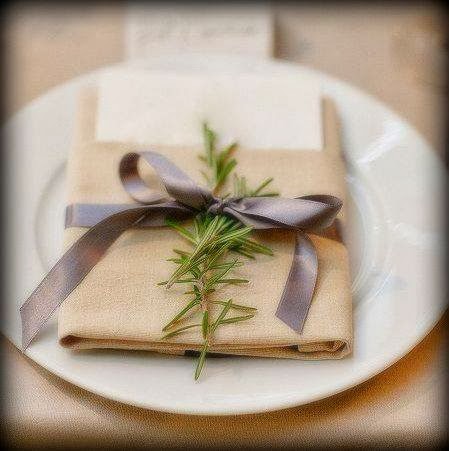 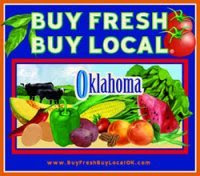 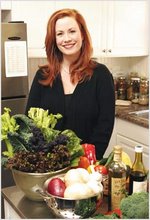